Established in 2003 by Eric Krell with a single clinic. Partnered with Upstream in 2018. Now encompasses 18 clinics.

Eric Krell is undaunted by lofty goals, whether in pursuit of his pilot’s license, starting a nonprofit youth soccer club in the Denver area, or opening Rocky Mountain Spine and Sport in 2003 with a single location and no patients.

“I think I saw two patients the first week,” Krell said, “and that was because they followed me from my prior job.”

The first clinic opened in a medical office building in Lonetree, followed by a second clinic in Littleton and a third in Castle Rock. Krell’s strategic plan, developed with the help of a consultant, was to have 15 locations. Like any small business, he encountered his share of turbulence, from Colorado’s relatively low reimbursement rates to the Great Recession to assuming debt that fueled expansion.

“It was just hard to grow,” he said, noting that members of his staff were wearing multiple hats. Krell himself was treating patients full-time while acting as the CEO, COO and CFO. 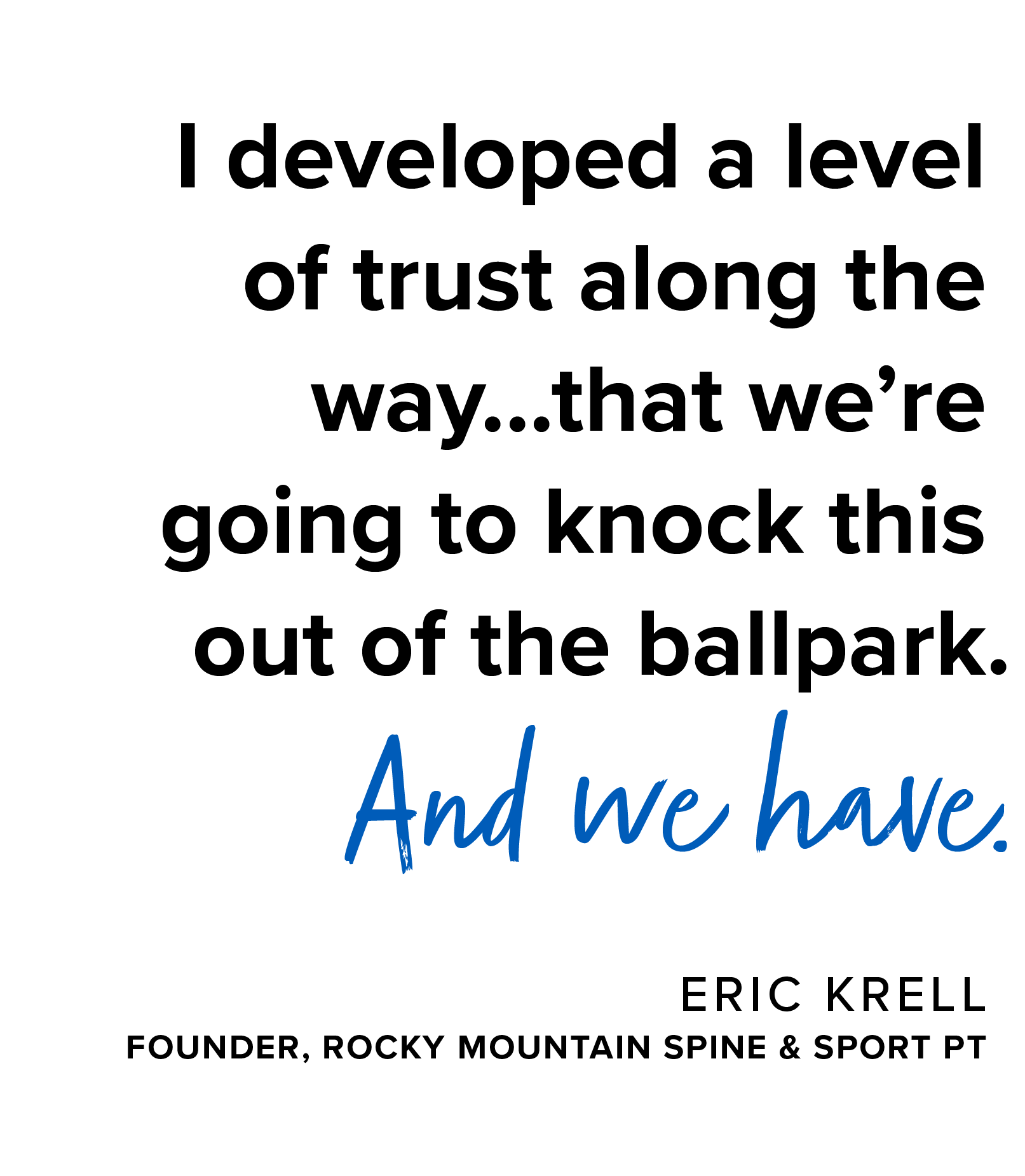 “My billing person was also my HR person,” he said. “She was also my front-desk trainer. She also did payroll. It was crazy. I had so many people wearing so many different hats, and I could not continue to scale like I wanted to.”

Fueled by his entrepreneurial spirit and a belief that he could provide a better service, Krell and his business partner steadily grew Rocky Mountain. But when the reality hit that he lacked the “operational infrastructure” to support continued growth, Krell was ready to take on a co-pilot.

Krell signed a series of non-disclosure agreements with prospective partners but quickly winnowed his list to Upstream and one other finalist. Ultimately, he was most comfortable with Upstream based on his knowledge of how the company had expanded in Kansas City and Atlanta and its cultural fit. So in January 2018, Rocky Mountain joined the Upstream Rehabilitation family of care.

The fact that Rocky Mountain would keep its name reflected Upstream’s deference to Krell in Denver.

“They made me feel comfortable that they’re looking to me for this new market for them,” he said. “They don’t know this market, but I do.”

Immediately after joining with Upstream, Rocky Mountain closed one clinic that freed it from a difficult lease. But as of 2021, the company has added five brand new clinics as well as a 3-clinic acquisition.

Upstream offers processes, resources and scale that help with everything from lease negotiations to leaseholder improvements to securing better reimbursement rates.

Upstream’s clinical director development program provides opportunities for staff members that Krell couldn’t afford to provide on his own.

“Our culture was OK prior to our joint venture, but now our culture is off the charts,” he said. “It’s amazing. And that’s one of the reasons why I think we’ve been able to continue to grow.”

Krell said he has better relationships with his three children and wife and sleeps better at night not having to worry about payroll and other stressors that Upstream has relieved him of.

He has time to mentor his team and focus on growing the business. He has been promoted from area director, responsible only for Rocky Mountain, to regional vice president. In that new capacity, he also oversees additional clinics in Colorado Springs operated by another Upstream brand, Orthopedic Rehabilitation Associates.

“I developed a level of trust along the way, during due-diligence, and I trusted that we’re going to knock this out of the ballpark,” he said. “And we have. We’ve absolutely been killing it out here.”

What were the challenges in owning your own business that motivated you to explore partnering with a larger company?

As a company, we were experiencing slow growth with de novo clinics (new clinics); we had limited operational structure and support (HR, legal, compliance, revenue cycle/billing); and we struggled to attract long-term associates because we couldn’t offer competitive benefits. Given our size, we struggled with financial burdens in a down market. As an owner, I was wearing too many hats and stretched too thin, so I wasn’t focused on what an owner really needs to be doing.

What did you see as the benefits to be in such a partnership?

The partnership freed me to be the leader I have always wanted to be. I am able to focus on my leadership strengths and grow the business. We’ve improved staff retention because we can offer exceptional benefits and, more important, be part of a great company culture. Upstream has helped us accelerate new-clinic growth with its proven track record and process for finding locations, signing great leases and getting new clinic openings to the finish line. The larger Upstream umbrella can help us weather the storm financially much better than I could have alone.

How would you describe your experience with Upstream so far?

It has been fantastic. I truly feel like a partner with full support. Our vision for RMSS is aligned with Upstream’s and we work very well together. I am even more involved in the day-to-day business than I ever was before and still feel like an integral part of its success.

What year did your partnership begin? And how many clinics did you have at the time?

When it began in January 2018, we had seven clinics.

What advice would you have to others that may be considering a similar opportunity?

Clearly define what your goals are with a potential sale or partnership: be all in or not in at all. Do you want out or do you want to partner and grow? You need to be clear on this and communicate it to a potential buyer.

Talk to references. Those who already have partnered can be valuable resources as they have walked in your shoes.

Be willing to listen and learn from leaders who know the industry.

Your business probably isn’t worth as much as you think. Be realistic.

If you are using a broker, use one that has worked with the potential partner before. It makes the process much easier.

If you would like to learn more about the options you have for selling your practice or becoming a partner with Upstream, please contact Phil Christian, Senior VP of Business Development at 205-991-7488 or email: pchristian@urpt.com